I am being slowly corrupted by my Nature girl wife, Theresa. She has got me eating fruits and berries. Before I moved in with her, I didn't like to eat any berries. With the last name of Berrie it seemed kinda...cannibalistic...don't ya think...? But, I've gotten over that and think some berries taste pretty good now, with enough sugar.

As a Shelf Chef, I am looking for a Summer ingredient that is cheap, tasty, and versatile (that's a Theresa word that means you can use it in many different styles of recipes). So... she got me to start picking wild raspberries. In Wisconsin these are called black caps, because they start out red, but are ready to eat when they turn deep purple or black. When harvested, the small white core of the berry stays on the stem and you remove and eat the "cap." We were lucky enough to have a patch of them growing in our back yard when we moved in. We can also pick them on nearby public DNR land and public bike trails.

In keeping with my Shelf Chef style of cooking, I have harvested my ingredient, so now I want to use it in many different ways.
It's time to get inspired by reading some cookbooks and talking to some people. Then I get creative and experiment....
Ok... now that's done... it's time to show others the results of my experiments:

Experiment 1:  Eat them Straight Off the Vine

OK...  after more than a month of waiting, we have pictures to go with steps 5, 6, and 7. Hope they help.
Step 5. After a month, strain out the solids and let the juice sit for one day.  I strained the cordial twice. I was going to use a wet coffee filter in the strainer the second time but it was way too slow.
Time for a Taste Test:
I don't drink straight brandy because it's too harsh for me, but this was already smooth enough to drink. Normally you let cordials sit for several months to get rid of the alcohol burn, so I'm still going to let this sit for a while to see if it gets even better. You can test the drink once a month until it tastes right to you.
Step 6.  Put cordial in sterilized, labeled bottles. Racking may reduce sediments but I am lazy and didn't have any tubing. I poured it into a measuring cup so I would make less of a mess when I poured it into the bottles. I stopped pouring when I saw dregs going in. 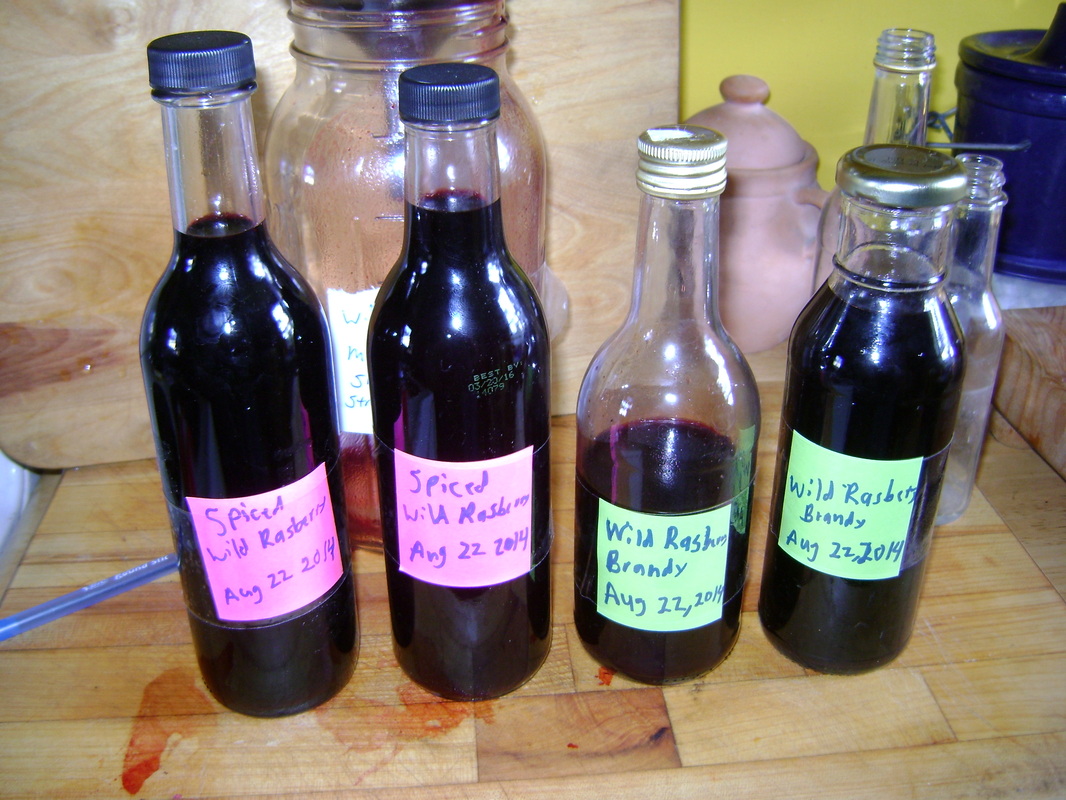 High tech labels... Quite cunning, don't ya think?  Now the hard part, step 7, put them in a cool dark place and wait one to three months.

OK... This is where it gets ugly... getting the paper off and finding out how smooth or unsmooth the crust is.  I removed the side of the pan, then slid a large spatula under the chilled cheesecake, while pulling the parchment out from under it.

Inspiration:  Our friend Holly made us an extremely yummy blueberry cobbler when we visited her once (that same night she introduced us to homemade cordials- it was a good night). She gave Theresa a copy of her cobbler recipe, which works with any fruit you may have on hand, so Theresa tried it with black caps.

Recipe: Any standard cookbook should have a blueberry cobbler recipe. Theresa thinks of it like a big muffin- it's basically self-rising flour, butter, milk, and sugar with fruit added on top. Then the flour mixture expands as it bakes and covers the fruit.  Yummy.

Inspiration:  Theresa makes this dish with various fruits when they are in season. It works well with black caps. Here's her recipe:
Results, Tips, and Ideas:
You can eat the black cap yogurt cheese straight, or use it as a dip for your favorite plain cookies, such as shortbread or graham crackers. I ate what Theresa made and started to think it would also make a really good pie filling over a graham cracker crust...

I recently learned how to make lassi- a drink served with Indian meals. I combined techniques from that and good old fashioned milk shakes to create the creamy drink below.
Variations:

Other Experiments to Try: