Summer Solstice (around June 21st) used to be my least favorite holiday because I have a much greater affinity for the cold than the warmth. I start to be uncomfortable when the Summer temperatures get into the 80s. But then we moved into this old house and I had to pay a heating bill for the first time. This house gets really, really cold in the Winter and heat is expensive, so I began to truly appreciate Summer's warmth for the first time.

I celebrate the Summer Solstice, which is the longest day of the year. It is opposite the Winter Solstice on the calendar (Dec. 21st), which is the longest night. We celebrate Winter Solstice by connecting with the dark from sunset to sunrise. Likewise, we celebrate Summer Solstice by connecting with the light, from sunrise to sunset. Weather permitting, we try to sleep outside on Solstice Eve, under the stars in our back yard, so we can wake up with the Sun. It's something we modern people don't do very often, and we've forgotten how magical it can be. We try to stay outside all day, and be somewhere we can watch the Sun move across the sky.

This year we decided to camp with our friend Reed, who is the Naturalist at Blue Mounds State Park. Blue Mounds is the highest point in southern Wisconsin, and the park has two observation towers, one facing East and one facing West, that lets you look over the trees and from where we planned to watch the sunrise and sunset.

The alarm went off at 3:30 am (Central Time) in our tent on Solstice morning, when it was still completely dark. The campground was foggy and we didn't see any stars peeking through the tree canopy, so didn't know if we'd get to see the actual Sun. We went to the East Tower anyway, hopeful that the sky would clear. We walked through the dark woods, up the side of the mound. As we emerged at the top and climbed the tower, it became clear that the entire mound was surrounded by clouds. But a strong, cold breeze was pushing the mist quickly to our left, periodically showing and covering the setting crescent Moon. We arrived at the tower around 4 am, and it was still totally dark, except for a slight smear of lighter grey to the East where the Sun would rise. It became gradually lighter over the next hour, and we realized that when the mist broke open we were looking over the top of a cloud bank to where the Sun was rising. I felt like we were being given glimpses of a beautiful secret. A bit after 5 am we got to briefly but repeatedly see the actual Sun breaking over the clouds.  We watched in silence, and it was more magical than if the sky had been clear... 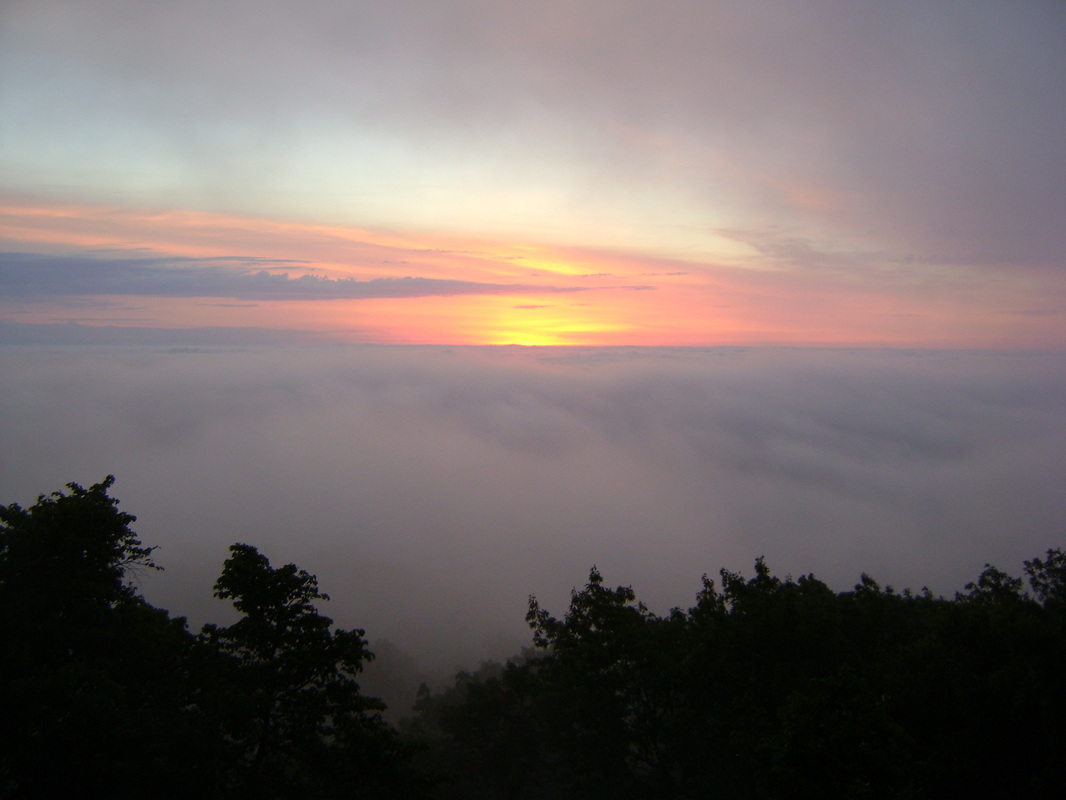 During the day, we took a Nature Walk that Reed led, going from the East Tower to the Indian Marker Tree. Native Americans created marker trees by purposely bending them over when they were young, so that they would grow into landmarks. Park experts used to think this tree pointed to a nearby spring, but now have concluded that it points to the Summer Solstice sunrise. You can't currently see the sunrise from the tree, since the Mound is now wooded, but when it was topped with its original prairie, there would have been a clear view.

A brief afternoon rain shower gave us a good excuse to take a nap in the tent, then Bear grilled dinner for us before we went to see the setting Sun. Later Reed pointed out that it would have been a good idea to spend the day on top of the mound, following the Sun as He rode across the sky. Maybe we'll do that next year.

The Sunlight shifted and seemed slightly subdued as we ate Bear's coffee ground chicken, and it started to seem like evening in the forest. We headed to the West observation tower and got there just in time, a little before 8:30 pm CT. The Sun had set by 8:45.  This time the sky was clear and we weren't alone. A family joined us who said this was their 35th year watching the Solstice Sunset.
The Sun hovered briefly above the horizon, then fell fast. It sunk out of sight, but its beautiful colors lingered. The longest day of the year ended, and we went into the waning time of the year. The days will get shorter and shorter from now on, although Summer's bounty still awaits us. Beginnings and endings are always intertwined. 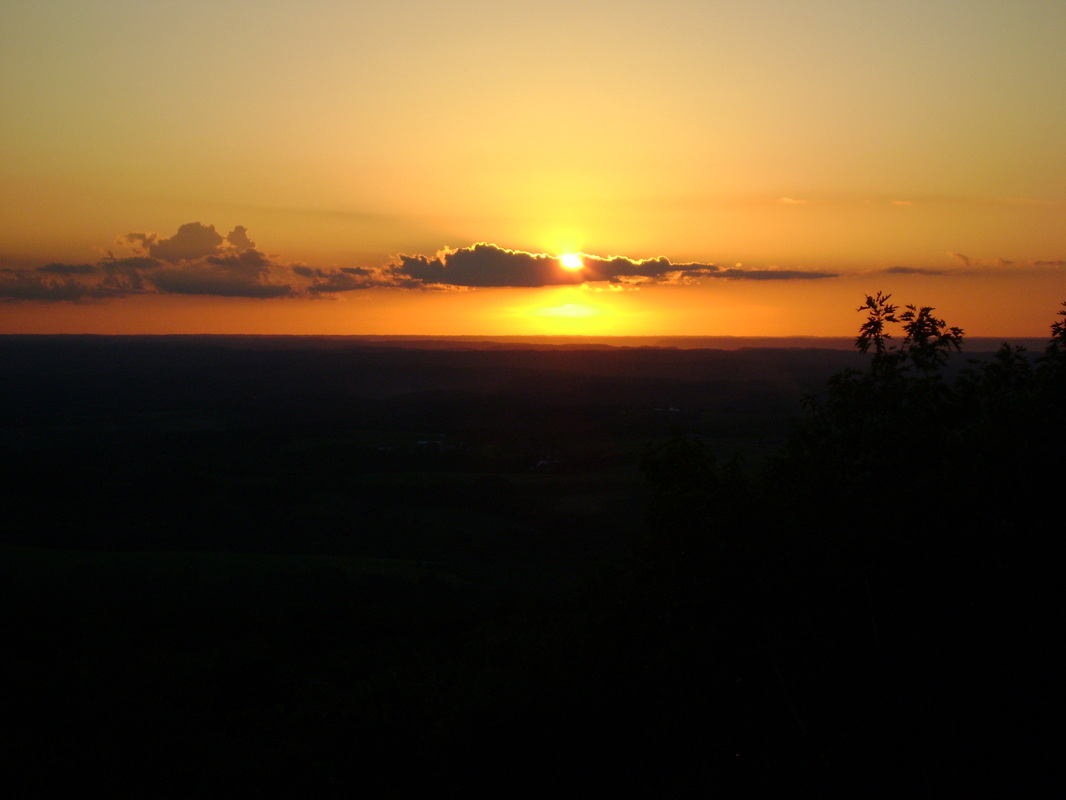 Watching the Sunrise and Sunset on a magical day is powerful,
because it helps us reconnect with our visceral understanding of the changing seasons.
We need to remember how long the longest day really is (around 16 hours of Sunlight in our area).
We need to be reminded of the gifts that are offered to us freely by the Sun- warmth and food.
The Sun heats the Earth just right- our Mother planet is habitable for many life forms, instead of being frozen or on fire.
The Sun's light becomes our food. Plants soak the rays of the Sun into their green leaves and miraculously photosynthesize it into food,
becoming the basis of the food chain that feeds the rest of the world.
On Solstice, we are reminded that the Sun is life. We celebrate and give Him our thanks.
Even after
All this time
The Sun never says to the Earth,

Look
What happens
With a love like that,
It lights the whole sky.