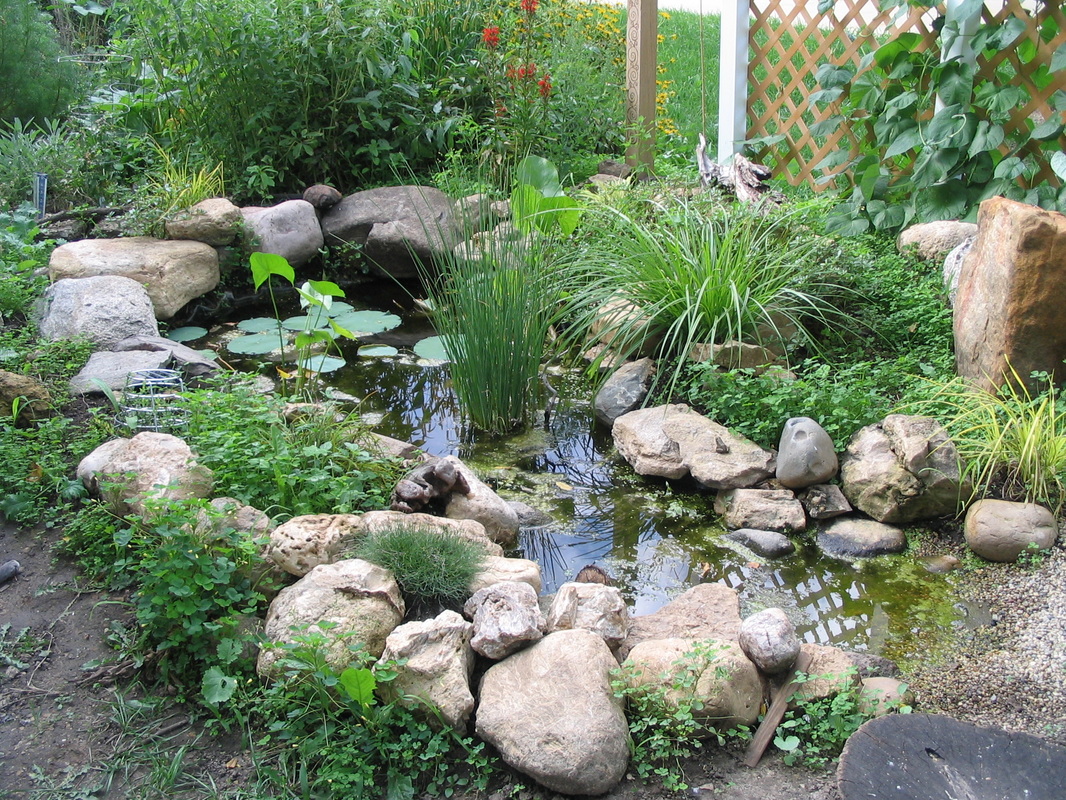 Contents:
- an introduction to our wildlife pond
- our book has complete instructions on how to build your own pond
- a photo preview showing some pond building steps covered in the book
- wildlife seen at our pond
- photos of the pond in later years

So far, building a pond has been my favorite and most rewarding garden project. It's one of the best things we've done to create habitat in our tiny yard, as water is the one essential habitat element that benefits all wildlife. For us humans, the pond is fascinating to watch. It is an entrance to another world, one in which humans can't live, even though we are made mostly of water. It is the most mysterious part of our yard, so I am drawn to it more than to any other part of the garden. Having a pond outside our door lets me observe and interact with wildlife I wouldn't otherwise see.

A wildlife pond has some major differences from other types of backyard ponds:
If you're reading about ponds or talking to staff in pond shops, you probably won't find much support for constructing your pond this way. In fact, like me, you might be told that it's impossible to maintain a pond without a pump. However, I did find a few backyard wildlife books that said this is the best way to build a pond, and it has worked well for us since we installed our pond in 2012.

Pond building is not very hard- I did most of the work during a week-long Spring vacation, with some help from Bear. The hardest part was finding information about how to build a pond that would work without a pump, so to make it easier for others I created my own step-by-step instructions, with photos illustrating each step, which I shared on this page for many years. Now, I have published them in an easy to use, revised, and updated book:

I've turned this page of pond building instructions into a book: 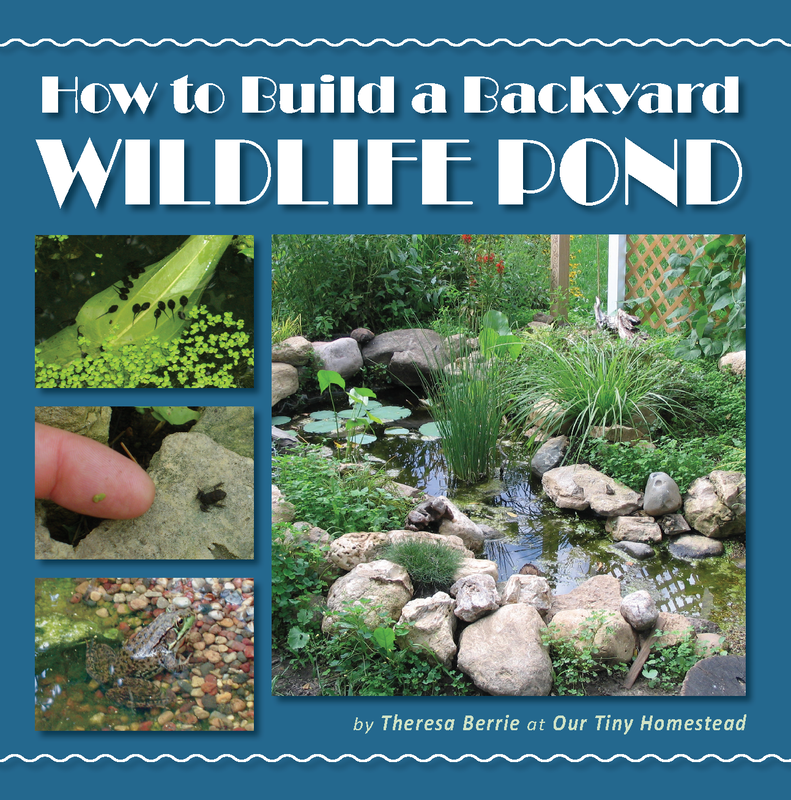 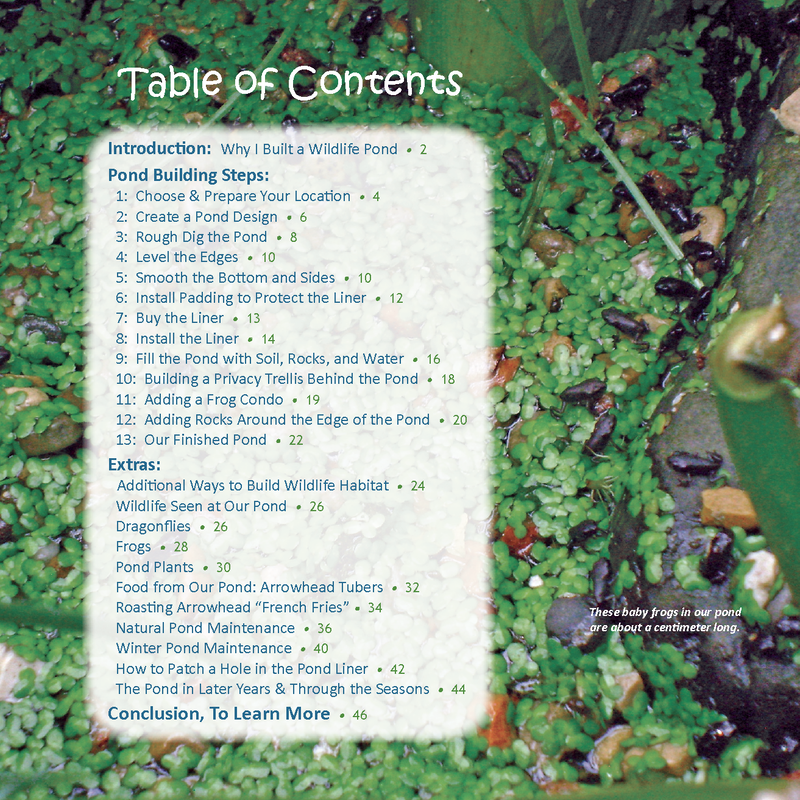 Available on Amazon:
Learn more about the book here.

To give you an idea of what building our pond entailed, here is a preview of some of the photos that illustrate the pond building instructions covered in our book:

Choosing and Preparing Your Location:

Smoothing the Pond Bottom and Sides:

Filling the Pond with Soil, Rocks, and Water:

Adding Rocks Around the Pond: 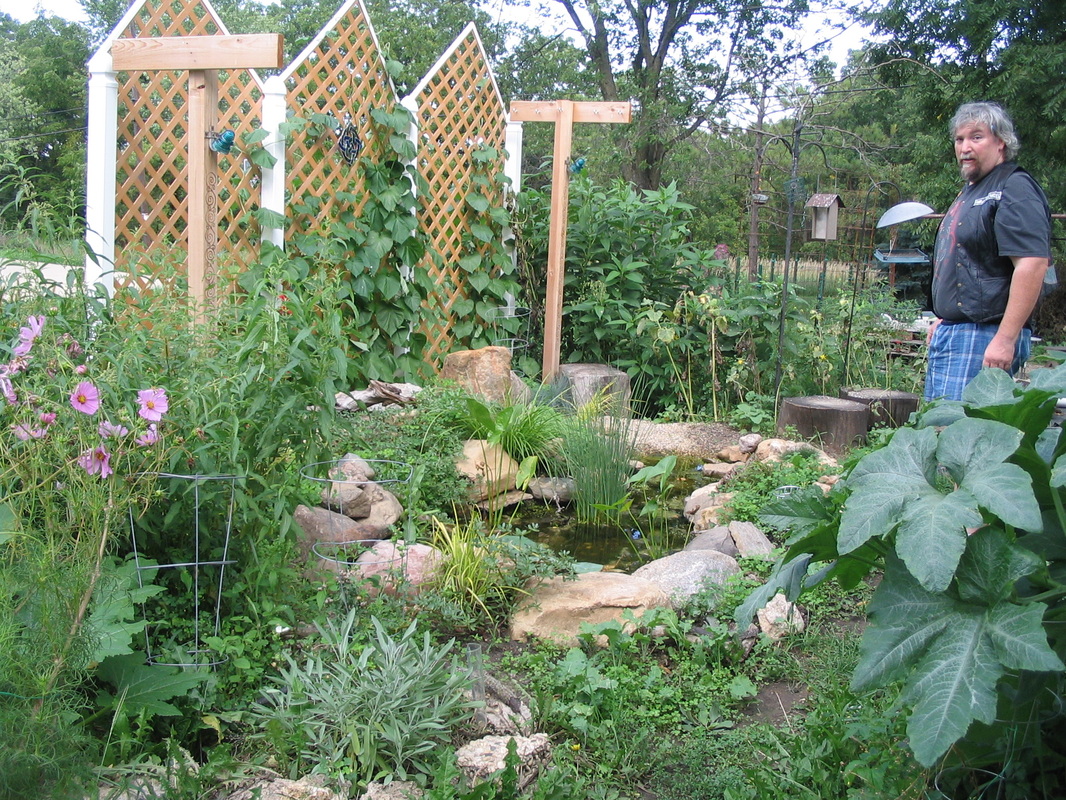 For instructions describing the above steps, and lots more information on our wildlife pond, see our book:

Wildlife and the Pond

Our pond is a low-maintenance, natural pond specifically intended to be beneficial to wildlife. Bear and I have experienced much joy watching many creatures use and visit it, since water attracts all types of wildlife. I hope you decide to build a similar pond that welcomes frogs, dragonflies, tadpoles, snails, bathing birds, and other creatures where you can have fun observing them in your own yard. 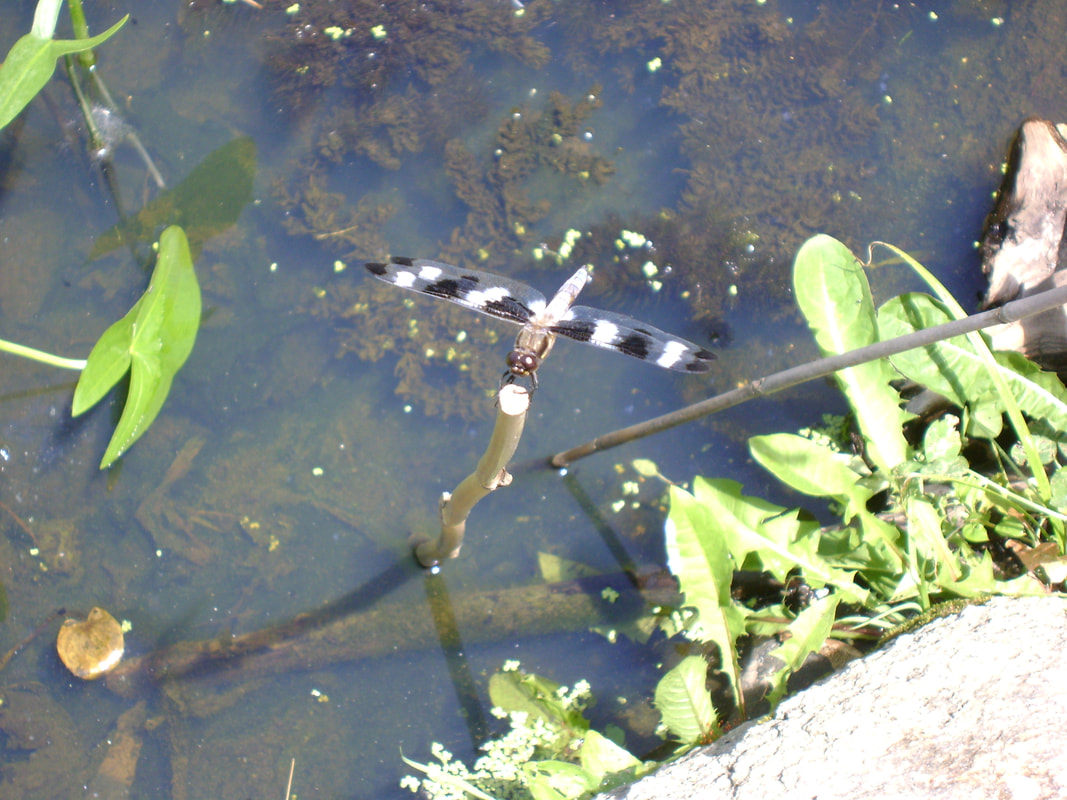 Wildlife Seen at Our Pond:

Once we finished our pond building at the end of May 2012, wildlife began using it right away:
By July I was amazed that there was a lot more life in the pond water:
By early August I saw a frog!  I wasn't expecting them to move in until the following Spring. It was a green frog. The next night I saw it just sitting in the shallow end, probably waiting to catch bugs.

In 2014 we began hearing one peeper frog in the Spring and one or two tree frogs calling during the Summer. These frogs don't live in the pond, but do need to live near water in order to breed.  By 2015, we had a much larger chorus of frogs serenading us in the Spring, and we saw tadpoles in the pond for the first time!

Here are photos of some of the wildlife that have used our pond: 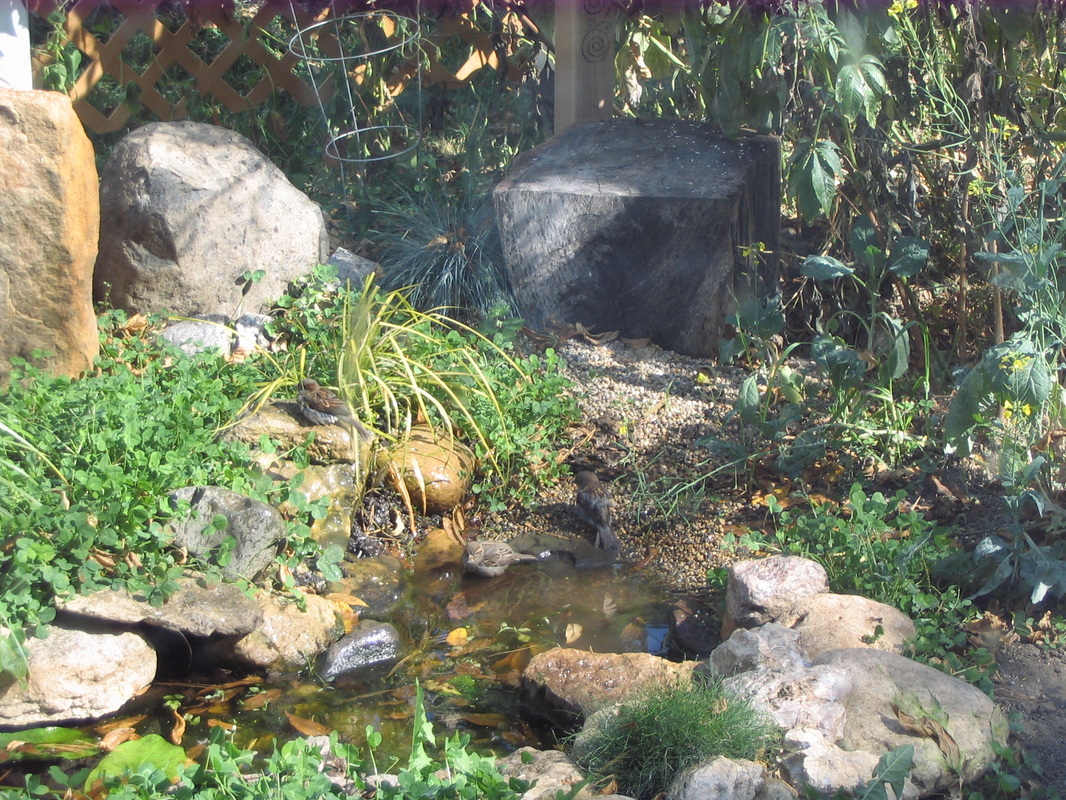 Birds are our most frequently seen visitors- for drinking and bathing. 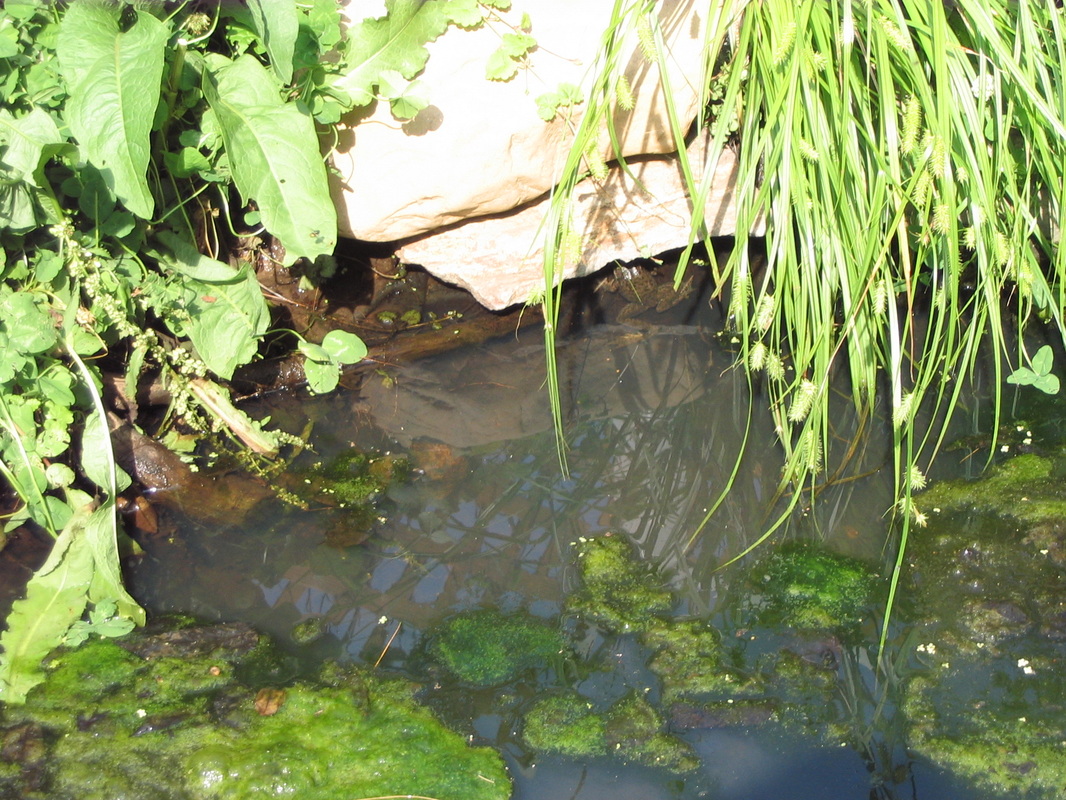 Can you see the underwater frog in this picture? 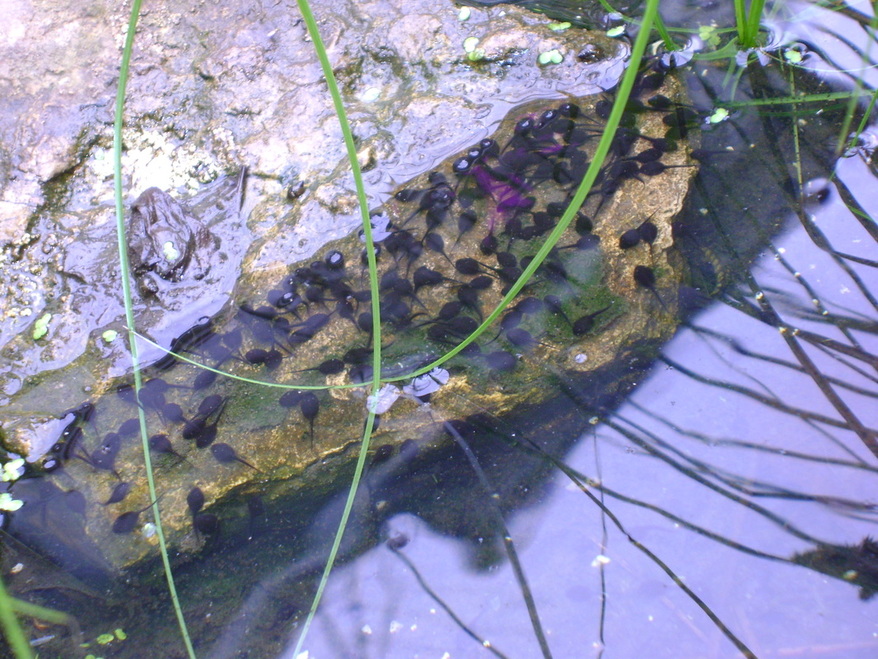 Here are the tiny tadpoles, which turn into frogs like the tiny one below. We saw tadpoles for the first time in June of 2015 (the 4th summer after after we built the pond), and they grew into frogs by the middle of July. 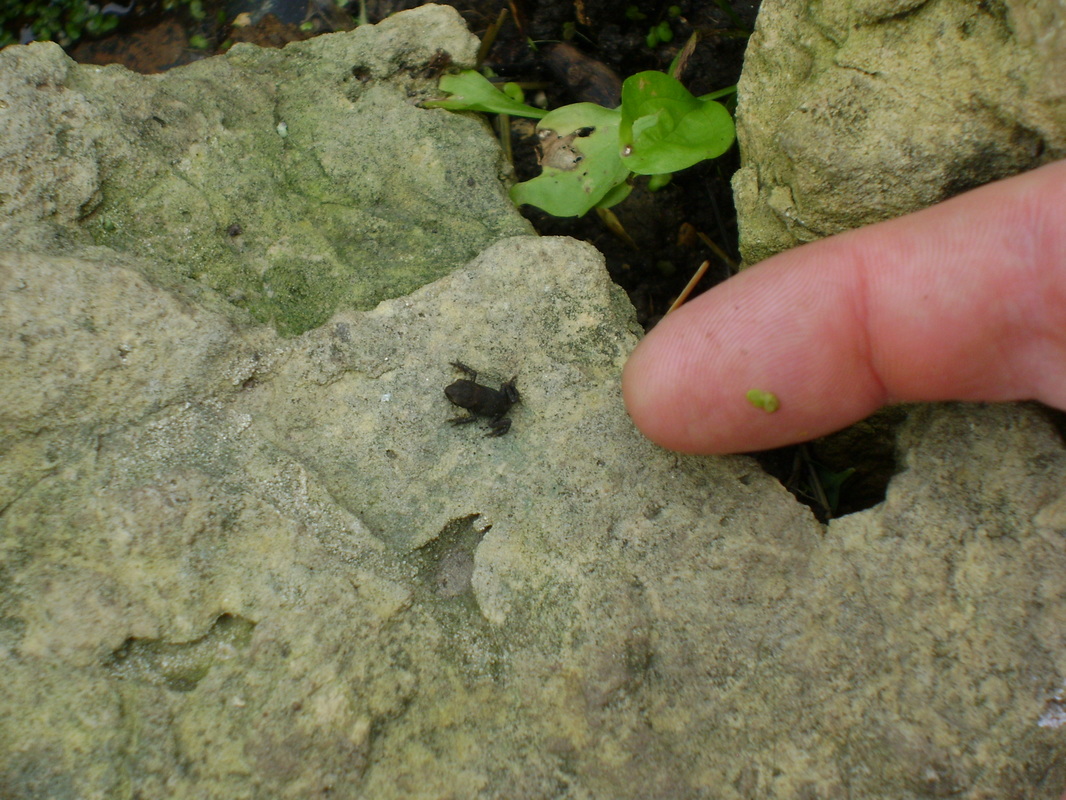 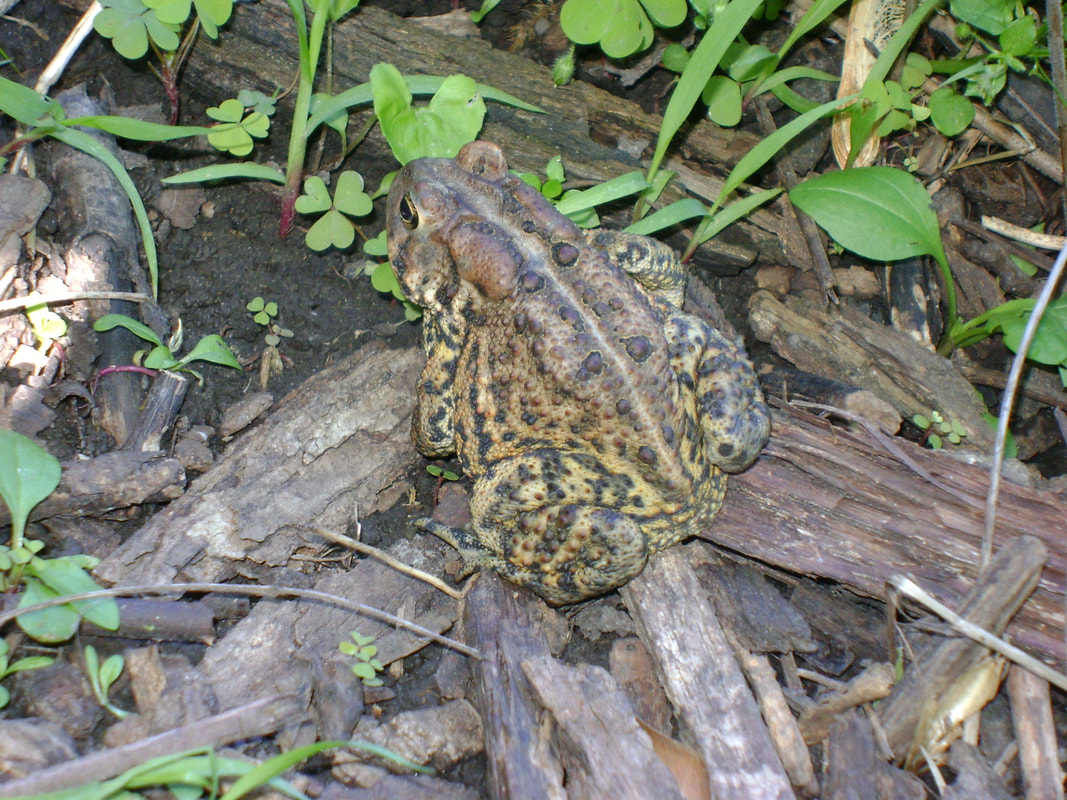 Eastern American Toads can eat 32,000 garden insects in a season. 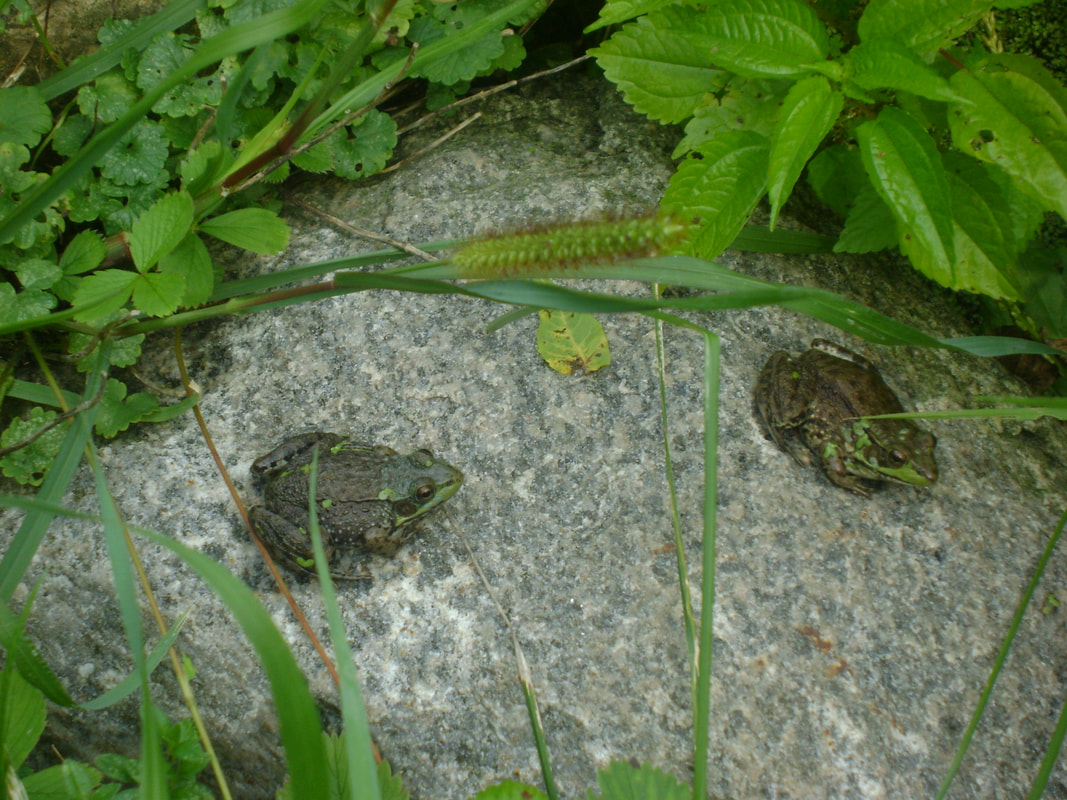 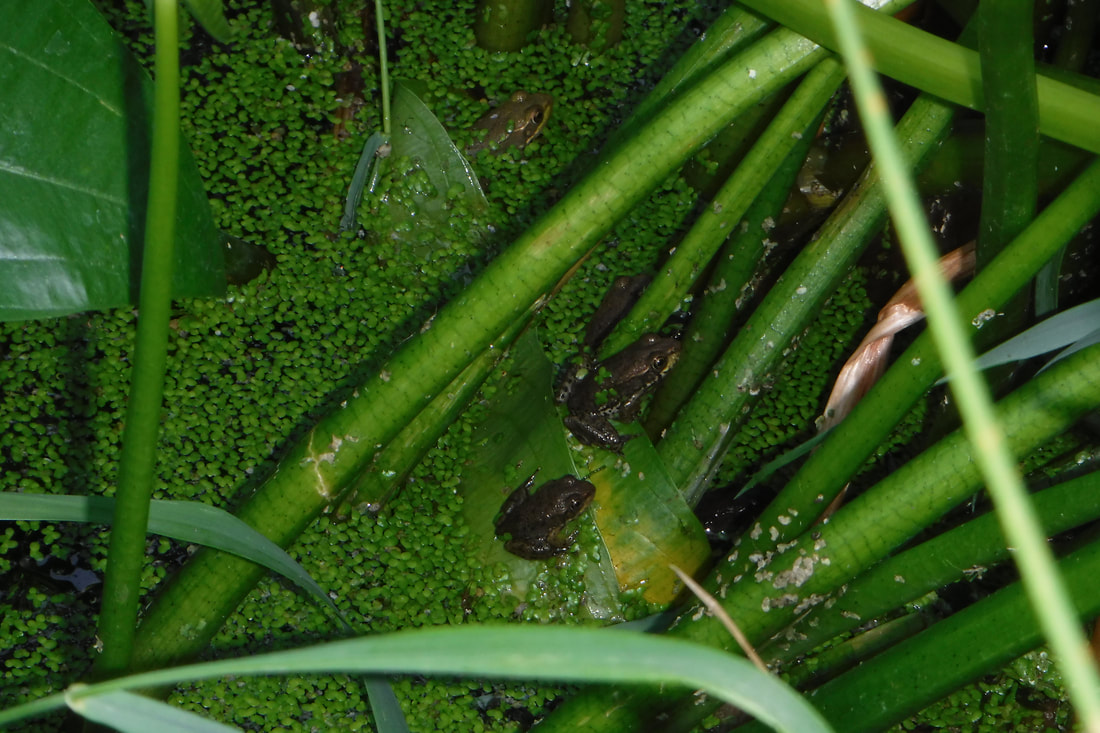 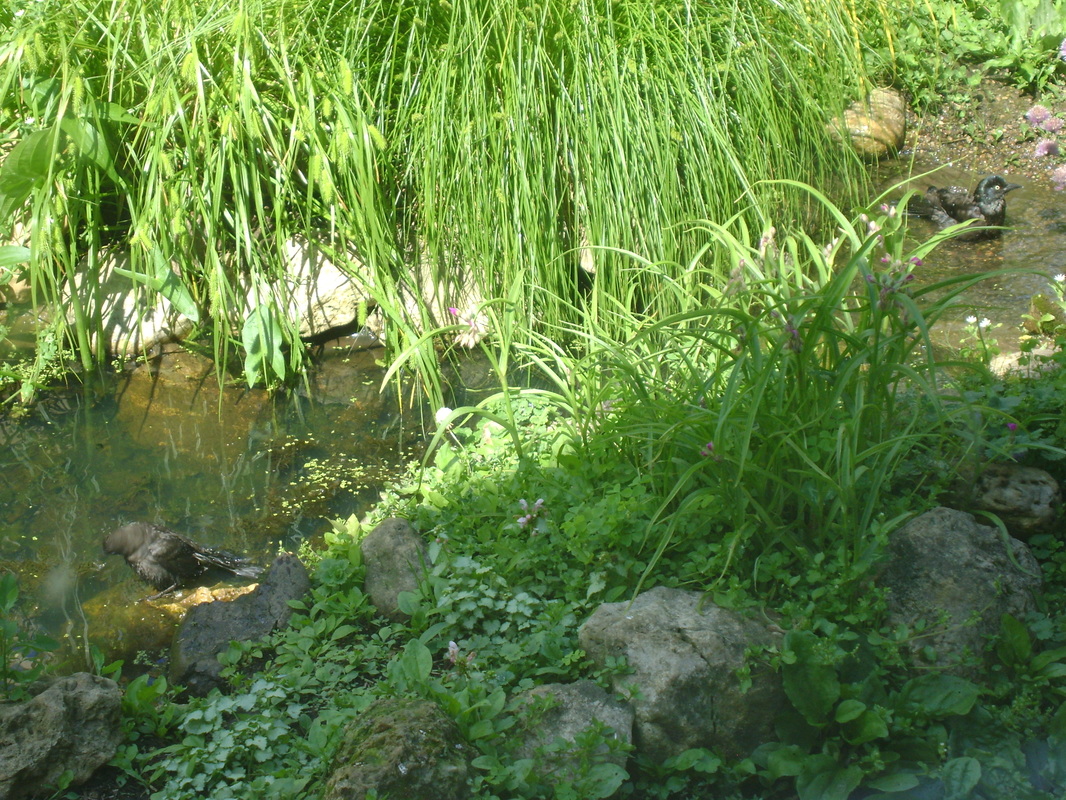 This is a parent starling (upper right) and a baby starling (lower left), both taking a bath in two of the pond's shallow areas. There were two babies and it was quite fun to watch them figure out how to get into the pond. 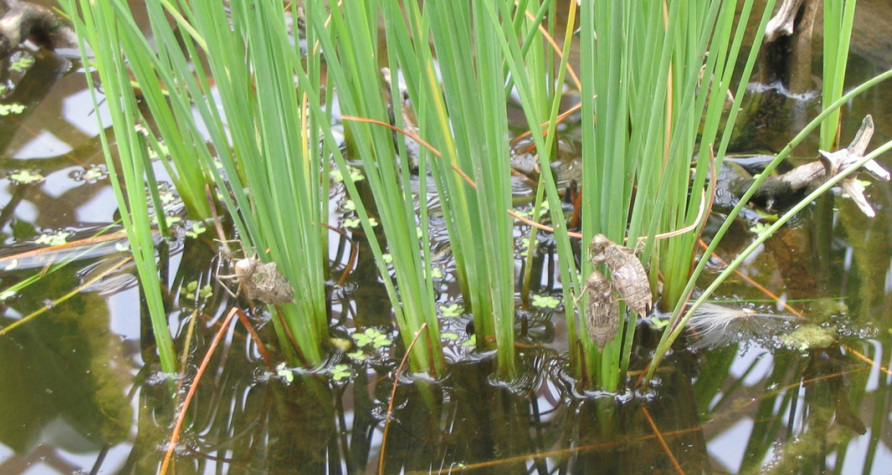 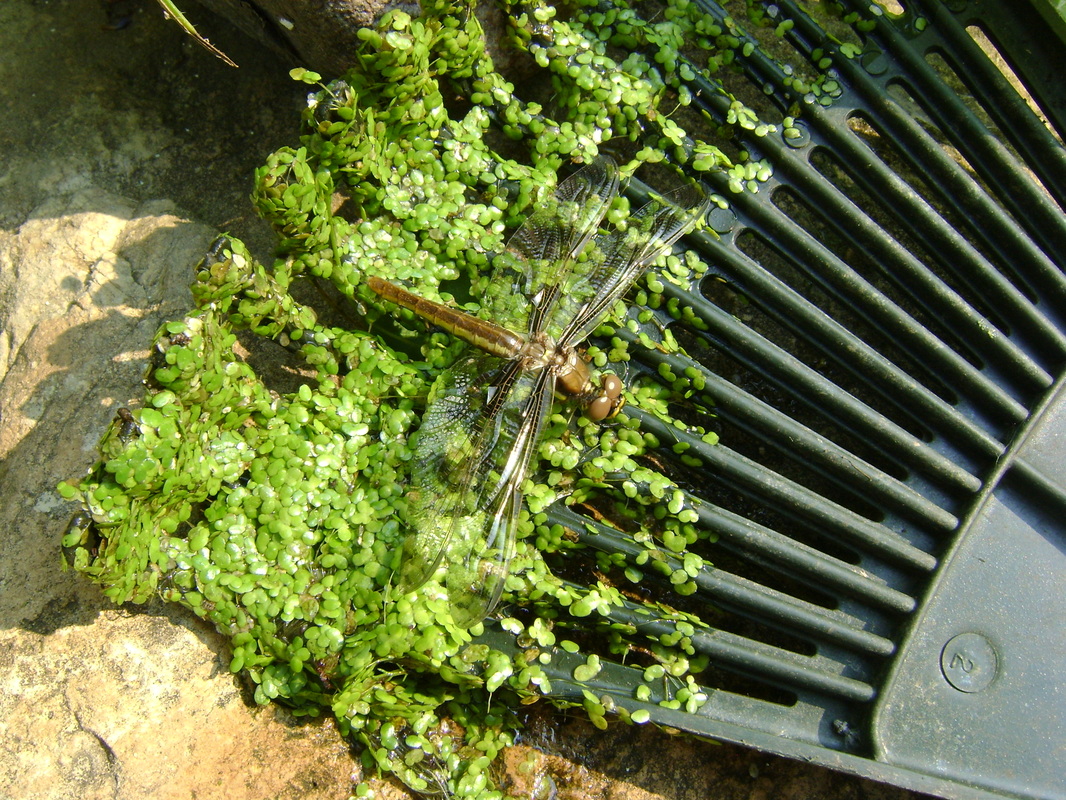 The Pond in Later Years 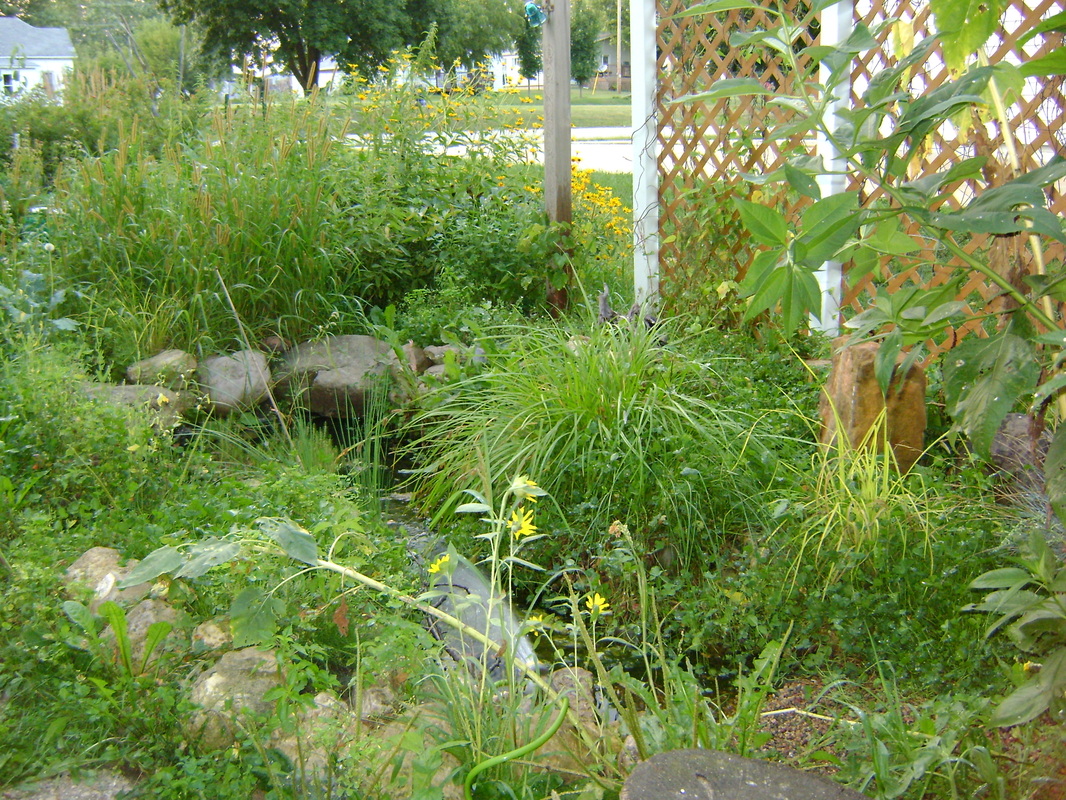 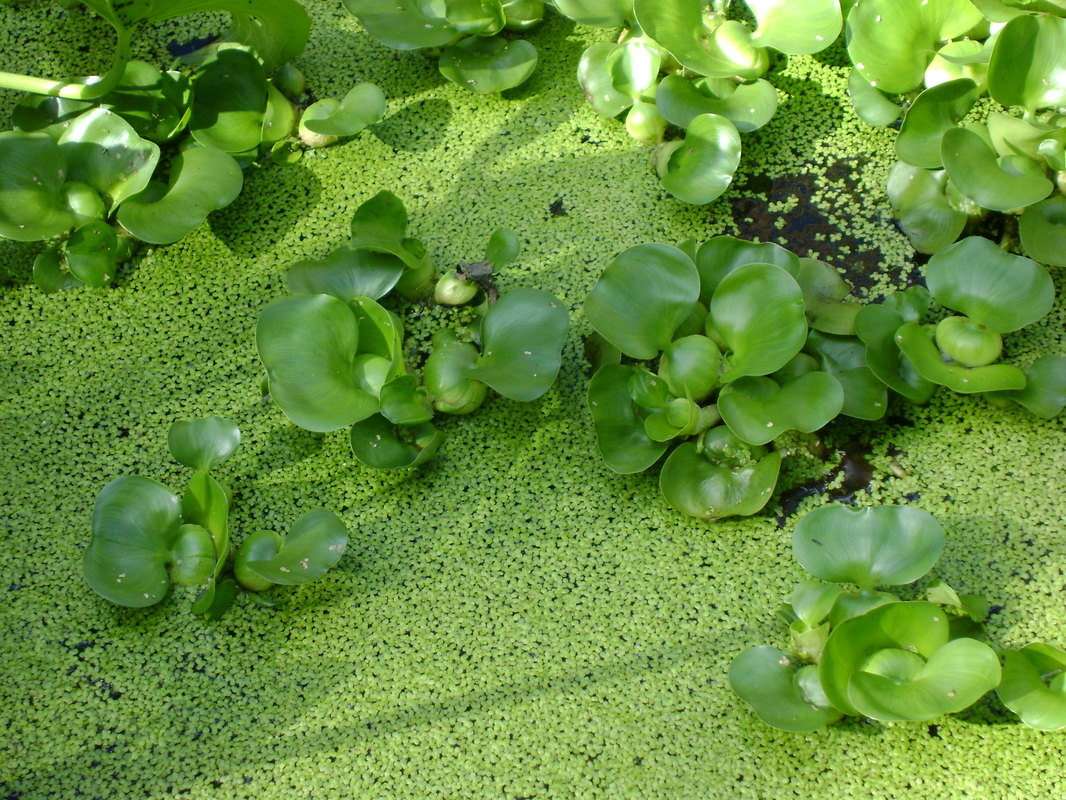 Here's a close up that shows the tiny duckweed covering the surface in between the water hyacinth. Both of these plants float along the surface of the pond, with their roots dangling in the water. Duckweed is supposedly edible, but it's so tiny I'm not sure how it could be collected and cleaned for eating. The "weed" part of its name is what it's considered by most people, but I think it looks good. Before these plants grew, the surface was covered in algae instead. 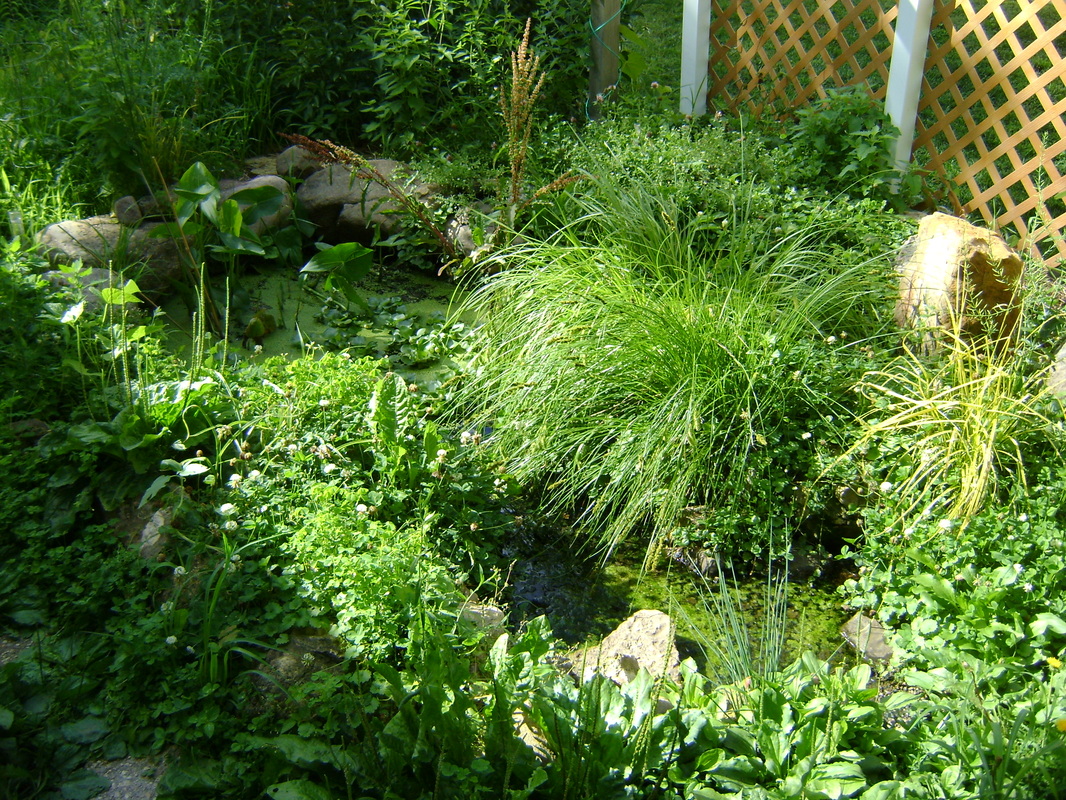 This year the pond is quite overgrown and bursting with life. 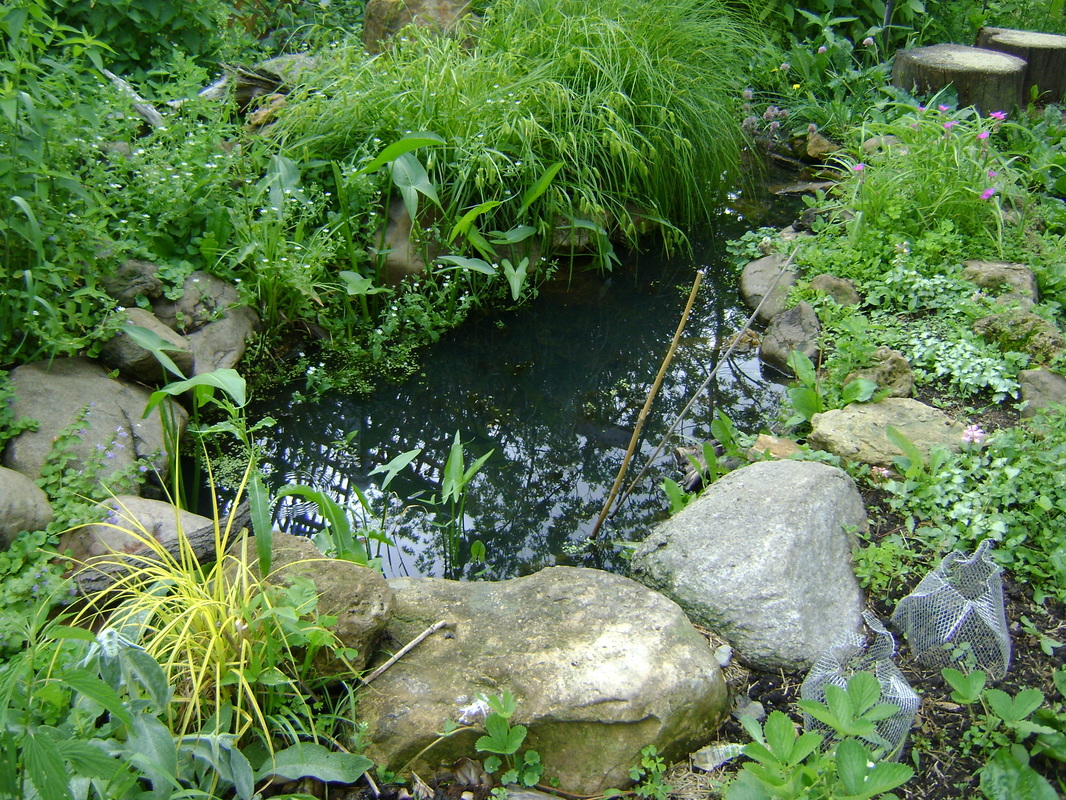 Spring, 2015. There are a few small arrowheads showing up in the deep end. 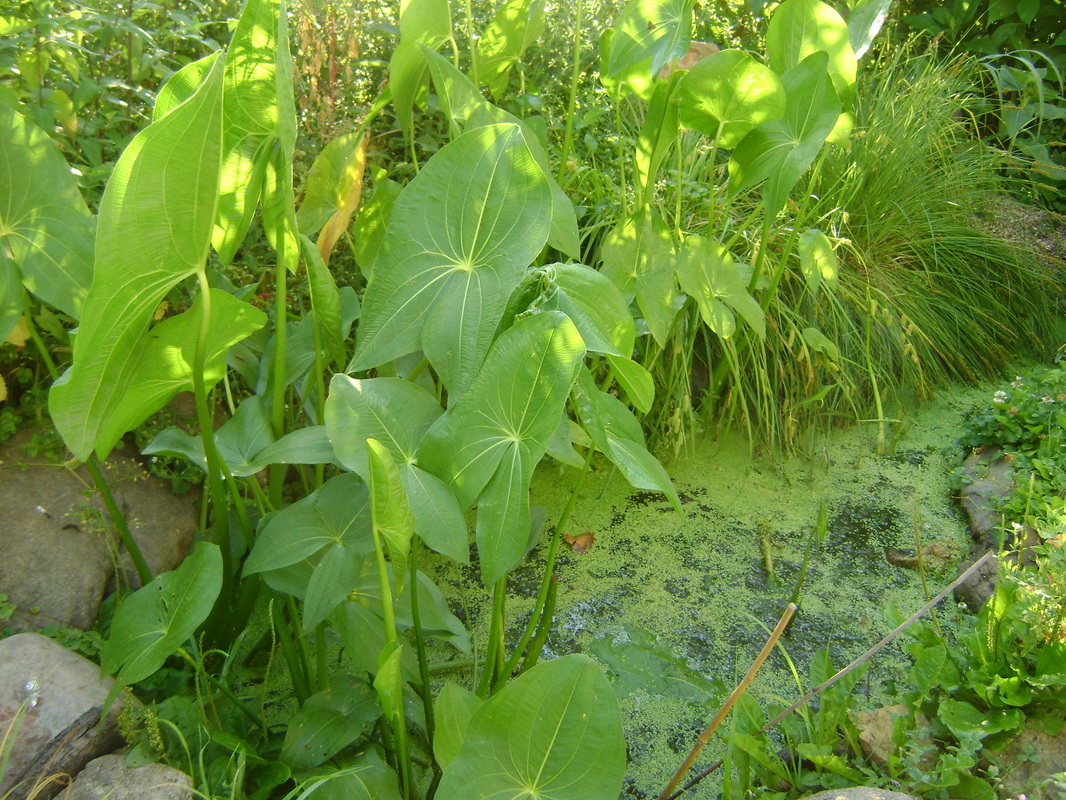 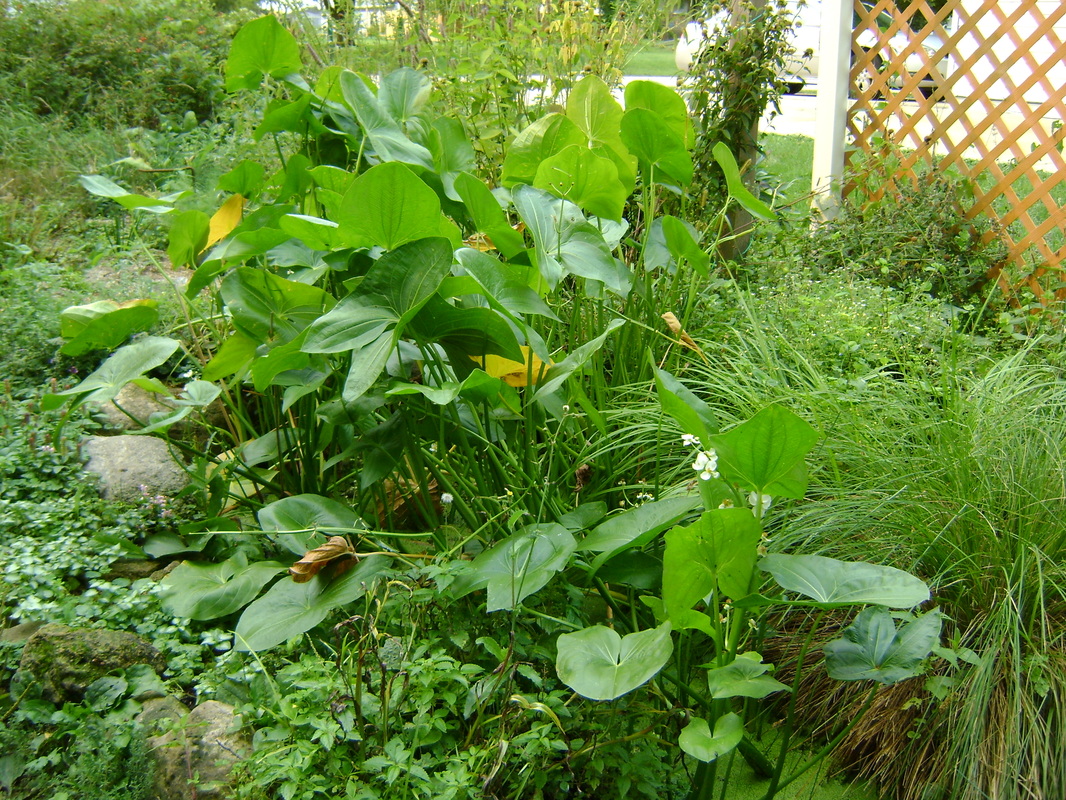 By late Summer, the arrowheads had filled the pond, even into the shallow end, making it look a bit prehistoric. Good thing the tubers are edible. 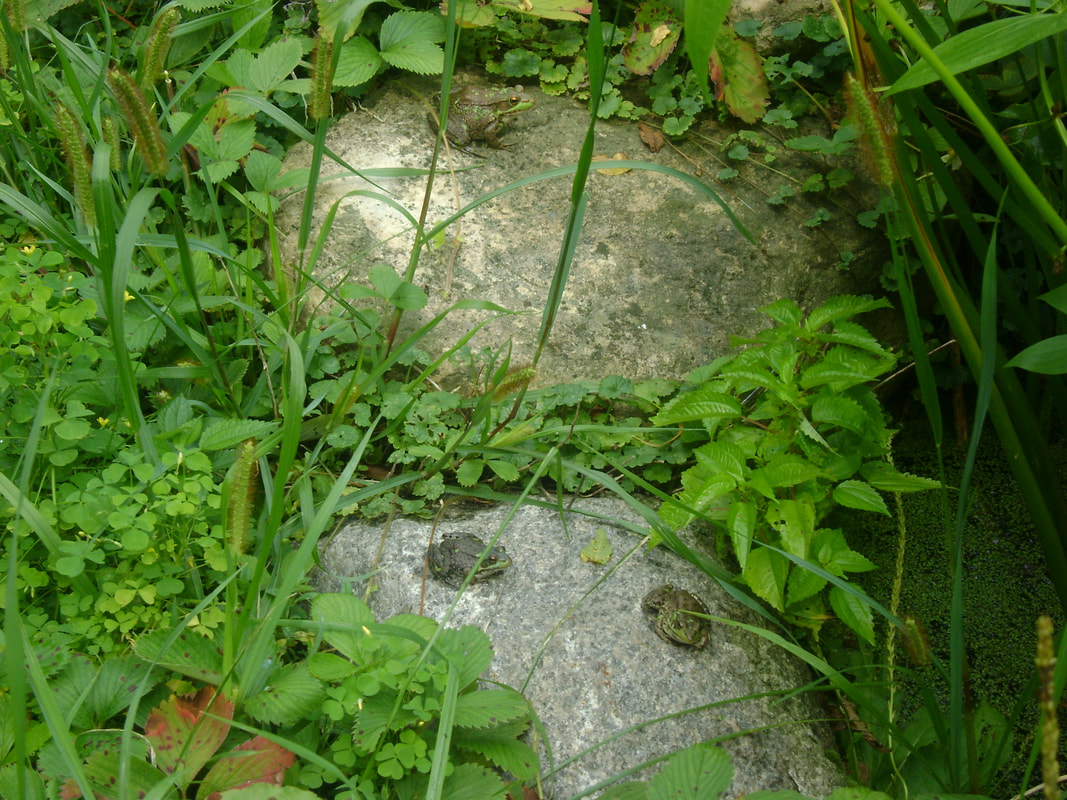 This year we watched several Northern Green Frogs basking on the rocks next to the deep end of the pond. 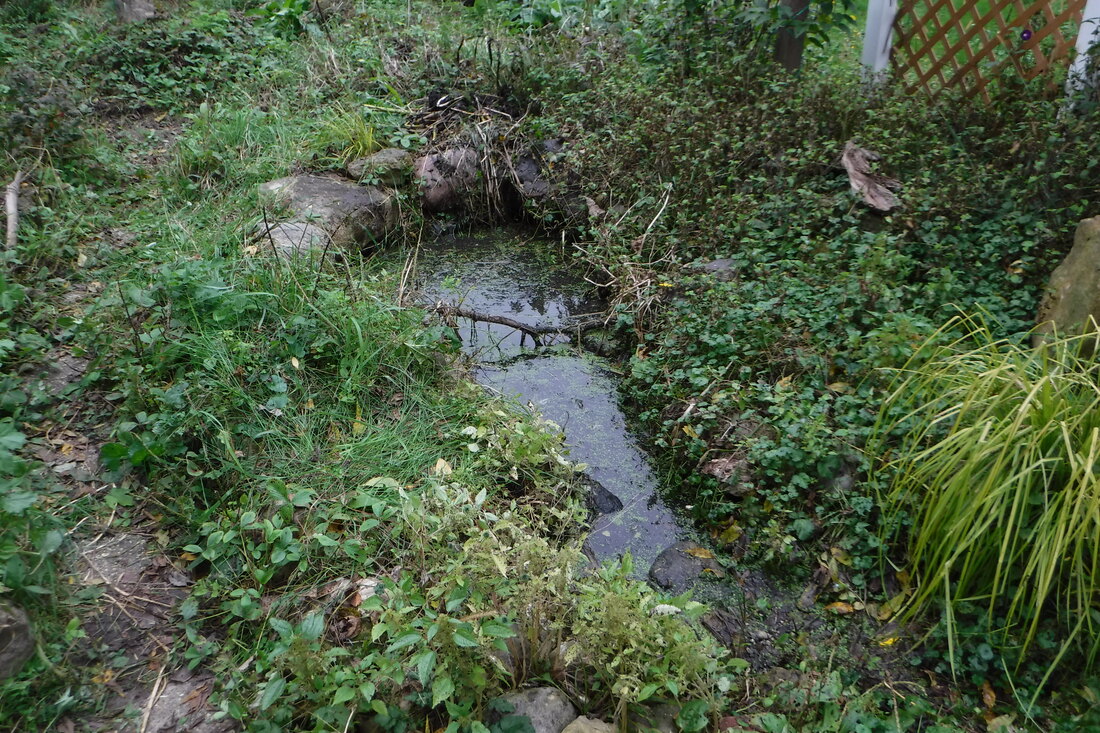 At the end of this Summer, the pond is not looking too good. The weeds have taken over. 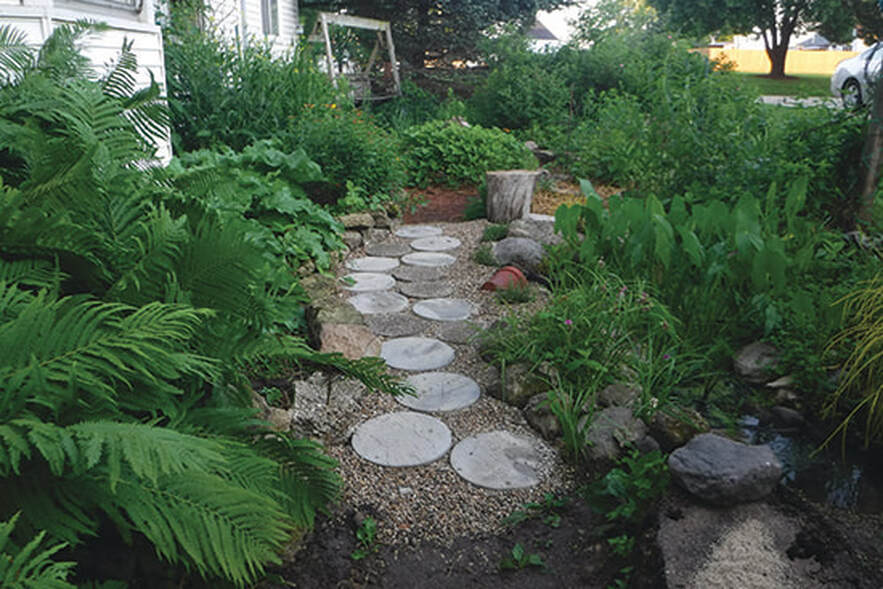 The new path looks great against all the Summer greenery. 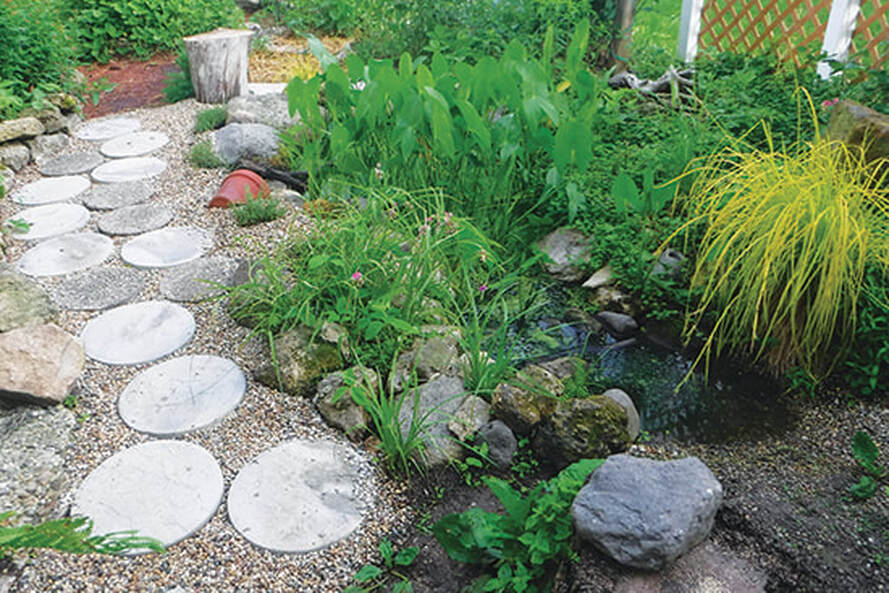 Here's a close up of the pond next to the new path. 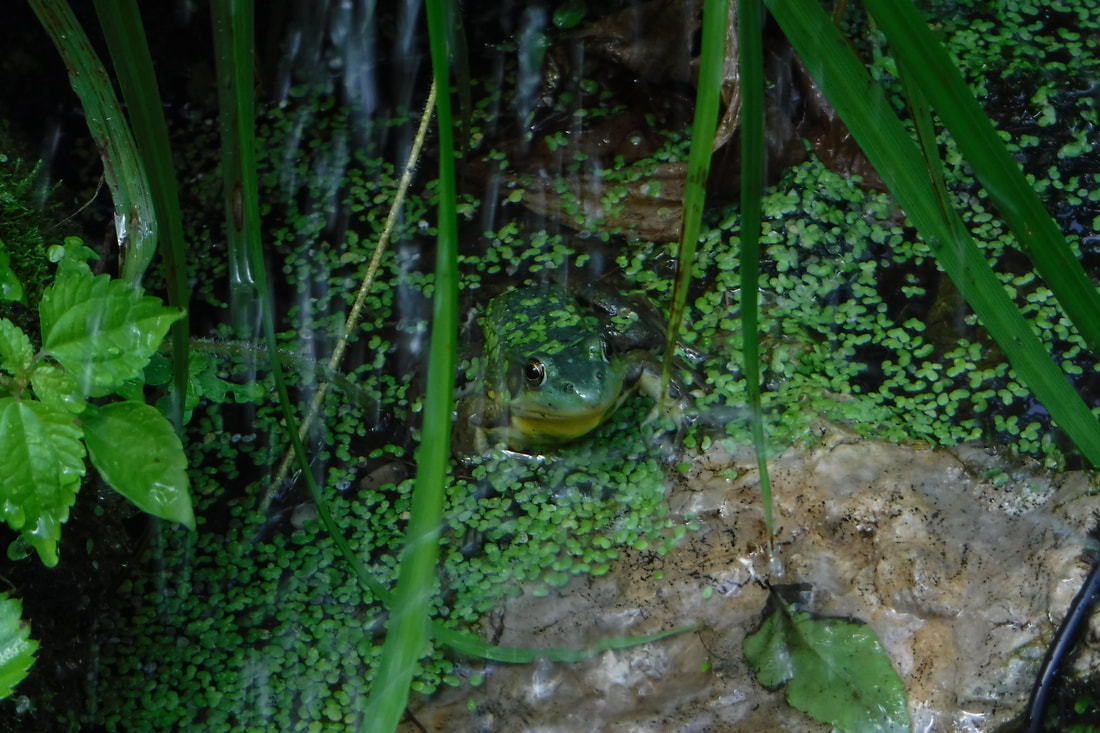 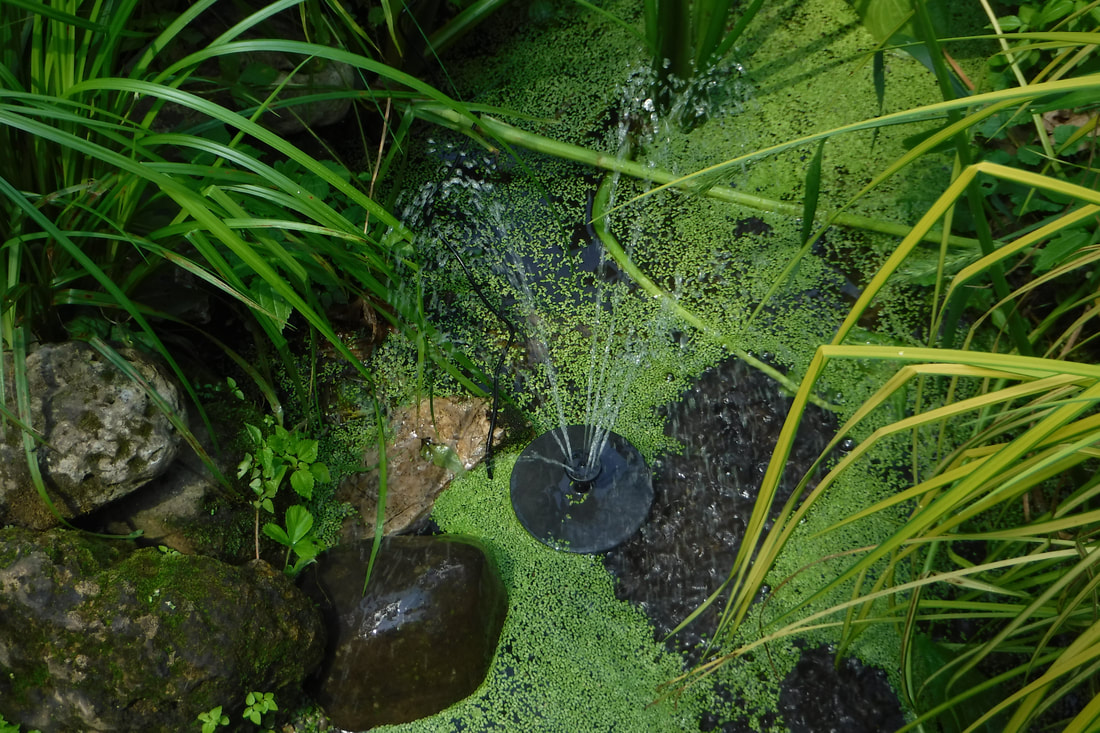 I experimented with a small, solar powered fountain, after discovering you could now buy one for $35.