Nettle is my favorite herb. I've been benefiting from its nutrition for almost 30 years now, and would hate being without it. Fortunately, since it's a "weed," it's not likely to go away. When we bought this house and I was finally able to start gardening, nettle was quick to move itself in and I was happy to welcome it.  Yes, it has a sting that can hurt if you aren't paying attention, but if you are paying attention, nettle can be a great ally. It's a natural multi-vitamin full of good things that your body will learn to crave. We eat nettle fresh in the Spring (after boiling briefly to remove the sting), then dry it in mid-summer to make into infusions the rest of the year (recipe below).
Nettle, a Natural Multi-Vitamin:

Nettle is an incredibly nutritious tonic. My body craves nettle because it is full of vitamins and minerals, including:
Harvesting Stinging Nettle:

Nettle plants have fine hairs that can sting you, so you need to pay attention when you're harvesting them. People who work with nettle a lot and have a good relationship with them don't usually have much trouble with the sting. Some people even purposely sting themselves to help relieve arthritis in their joints.  If you don't want to get stung, though, avoid touching the plant. To harvest you can either:Remember to thank the plants when you're done harvesting. Nettle is less likely to sting you if she knows you appreciate her.
Growing Nettle:
Nettle Photos
Here's a photo of nettle in the first weeks of Spring, when it is just coming out of the ground (around early April where we live).
This is when they are best eaten fresh, when the plant is short and you can eat the tasty growing tips (after boiling to remove the sting): 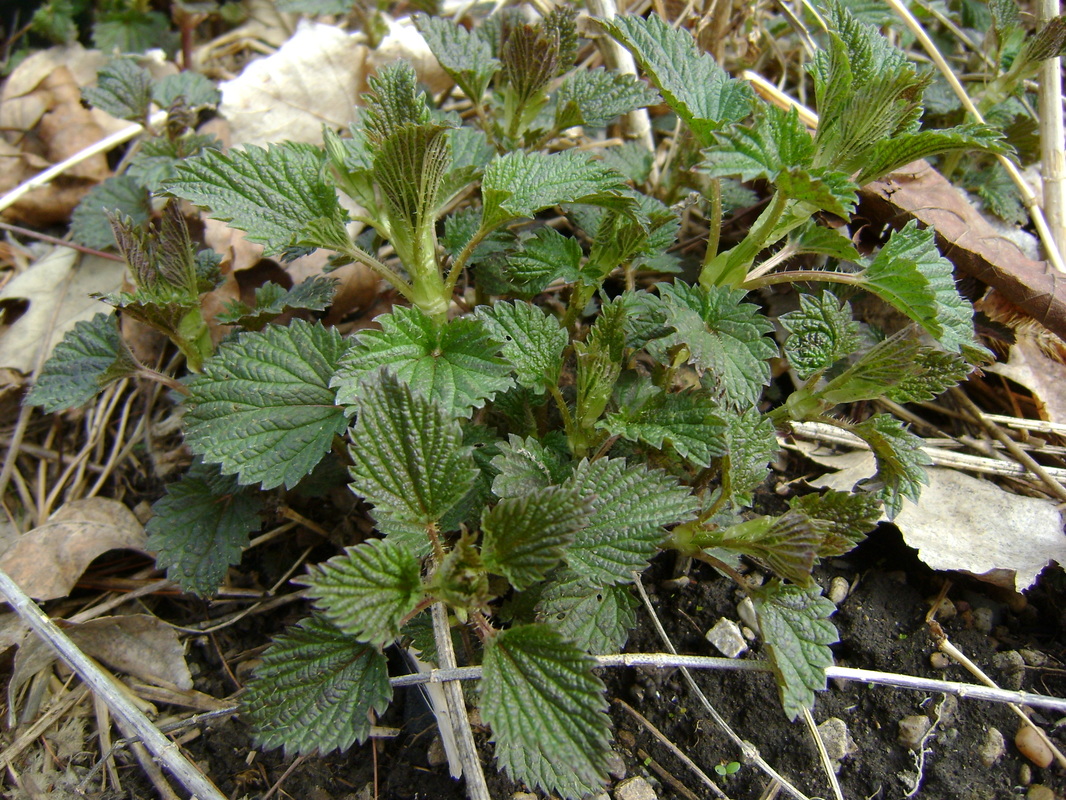 Can you see the tiny stinging hairs on the stems and leaves?
Here's one of our nettle patches that is few weeks old, when the tops are still good for eating, at the end of April: 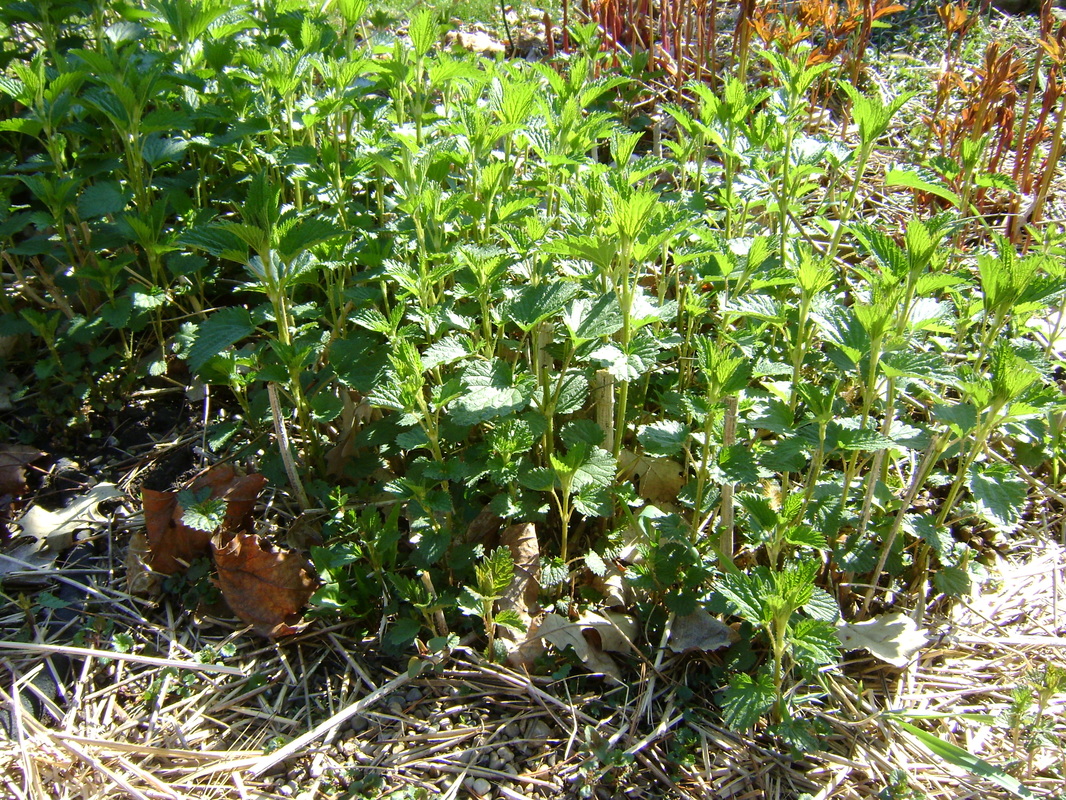 Nettle in mid-June, when it reaches about 5 feet tall and is ready to harvest for drying: 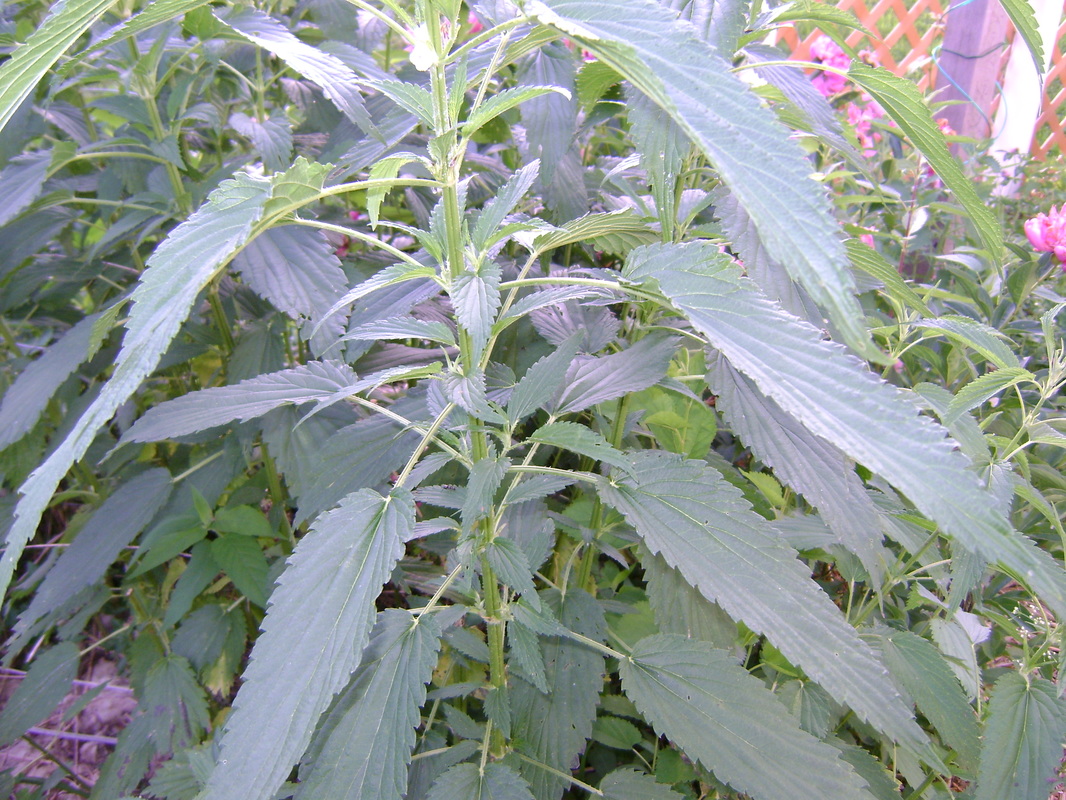 Here's another versatile recipe that can be used with nettle and/or chickweed, and is also great with wild ramps (wild garlic):

Your incredibly nutritious nettle infusion is now ready to drink.
Some may find the taste strange at first. I liked it right away, and after I had it a few times,
my body liked the vitamins & minerals so much that I have craved it every since.
Even Bear likes to drink it now.